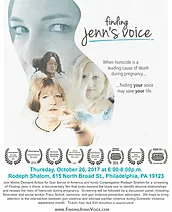 On March 16, 2011, 27-year old veterinary technician, Jennifer Snyder of Allentown, PA was murdered by her married boyfriend of more than 2 years after he learned that she was pregnant. Veterinarian David Rapoport shot Jenn twice in the mouth and once in the back and then dumped her body in a wooded ravine. He was arrested 6 days later, eventually pleading guilty to avoid the death penalty. He is now serving 2 life sentences for his crimes.
A week after her murder, Jenn's aunt contacted the filmmaker, Tracy Schott. She wanted to tell Jenn's story, to give Jenn a voice. On impulse, Tracy googled pregnancy and homicide and was shocked to find several research studies that revealed: Homicide is the leading cause of death during pregnancy.
After speaking with domestic violence experts and survivors from around the country, we learn that there are many cases like Jenn's. Through these conversations, the film paints a picture of the anatomy of abusive relationships that looks beyond the black eye.

Ultimately, it is the survivors of intimate partner homicide attempts who help us to find Jenn's voice, and to understand the dangers overlooked by so many. Their insights and experiences allow the film to give a voice to the voiceless, and leave the viewer with a message that is hard to forget.